Pre-pandemic, the live event business was booming! Once March 2020 hit, we went from epic live events to scrambling to figure out what was going on. All of our clients had to postpone their events and transition to virtual events. The good news is that they already knew how capable we were of putting on great live events, so this knowledge of our capabilities made it easier for them to transition to virtual events with Clarity. This was pretty much the new norm for our clients except for one. Starting in the Spring of 2020, as only creative collaborators with their virtual content, Clarity crafted a wonderful partnership with a new client that eventually led us to become their live event production partner.

Each year, Wiley has an internal sales kickoff meeting with an attendance of around 450 people. The unique and special twist is that each year, the event is in a different part of the globe. The year that Andi and Wiley had been introduced, Wiley was set to hold their meeting in Thailand. Unfortunately, the pandemic had other plans. Wiley had to change course and go virtual.

While going virtual for an international audience can be tricky, it’s not impossible. Globally, there are different internet access restrictions with varying rules and regulations in different countries. As a global business, Wiley needed to find a way to host a virtual event that followed all regulations across the world to ensure 100% participation from their team. They decided to host the virtual event on Microsoft Teams so that it could stay an internal event and because it was already a pre-approved platform that the company currently used.

Navigating through uncharted territories, the virtual event was now a go. It was crucially important to keep people present during the meeting and figure out a way to keep engagement up. Feeling like they needed a hand on the creative side, they reached out to Clarity and asked, “Can you guys do something creative?”

We immediately responded with, “Absolutely!” Getting right to work, Clarity’s creative team brainstormed some creative ideas to add more flavor to the event. They landed on helping Wiley create an opening video that they could show online before the event. We also started working with animated introductions for the event speakers. Wiley had chosen ‘nature’ to be the theme of the PowerPoint template that year, so we tailored much of our creative content not only to their brand guidelines, but re-used and expanded on the nature images selected for the PowerPoint to bring continuity to all assets of the event.

Looking for small ways to make an impact, our creative team crafted a custom logo for Wiley’s 100% Club to honor the achievement of this sales group. While these examples seem less important than making sure the event is recorded or that the keynote speakers know their cues, they go a long way with the attendees and get them motivated and excited about the event.

We wanted to make sure we went the extra mile for them so we decided to look further for ways to help them elevate their event. In our creative collaboration meetings, we looked forward to the Annual Awards show. We were told that in the past this award show is the culmination of their time together, the closing piece which acknowledges the best of the best. In past live event years, the Awards show was really enhanced by the music, the lights and the collegial support. To transfer this excitement to a virtual event, we needed to think way outside the box. After reviewing logistical concerns over winners getting center stage for nominations and acceptance speeches and how technically we could achieve it, Jesse came up with the idea of a fully animated Awards Show. Technically, it would just be a single playback, but the creative way in which we could frame the Sales Leaders, design a Show Host and create the feel of an Oscar caliber awards show won everyone over. We animated a version of an old Academy Awards set and place animated versions of the Wiley Sales Leaders on it to present their division Awards. By using footage from live Award shows that had fly-by camera angles interspersed throughout, we were able to recreate the feel of a televised Awards Show. Music was also key. This was extra engaging for people participating in their homes.

During the second year of working with Wiley, COVID was still in full swing, so they opted in for another virtual meeting instead of risking health concerns. While it was a bummer to not be in person, Wiley already had a virtual event under their belt. This time they would be able to focus on enhancing the creativity from the prior year. Gaining a little bit more trust in Clarity, Wiley wanted us to take more control of the creative. This second year working with Wiley contained a lot of pre-records for their Sales Leadership team, including virtual backgrounds. This added production value in addition to bringing more creative to the table to really support their messaging to their team. Now, we were assisting the build and design of both the meeting slide deck and the Awards deck in addition to animated transitions, opening videos and instructional videos for outside platforms used for the Awards show to add even more value than the previous event. 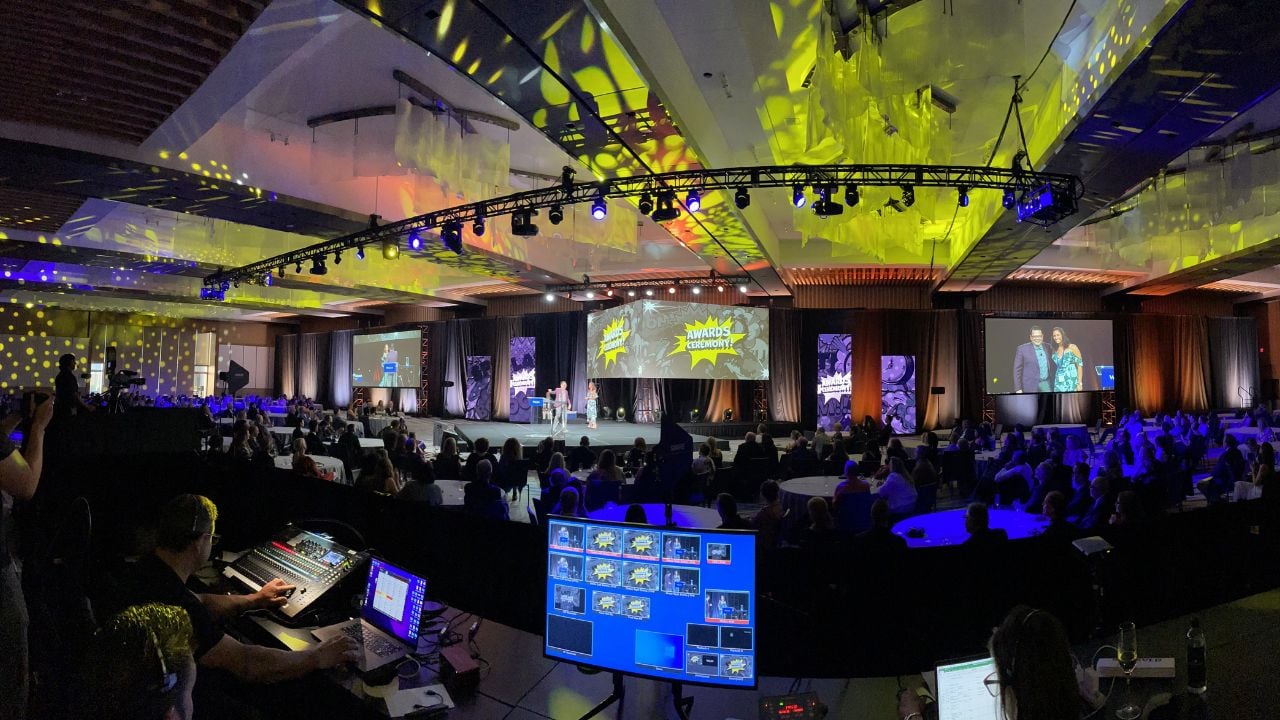 “Once the opportunity arose to transition to live, Thailand seemed like too risky of an option, so  options for different areas within the United States to have a live show were proposed.” - Andi. From a cost perspective, Clarity is based in southern California, making it a bit more beneficial for the client to do a show locally. And it was also imperative that the creativity and branding be on point, seeing how it was the entire company’s first year back in a live event setting.

Through these negotiations, Wiley decided to pull the trigger and go with Clarity for their live event! Our team went to LA to have a meeting with the clients’ Event Planner, CMO, and Director of Marketing to discuss the event. Once everyone understood that they wanted their event to drive engagement with a specific theme, it was game time. This year’s theme, “Accelerate”, was simple yet had a lot of meaning behind it. Wiley wanted to help push their own sales team beyond their limits due to the pandemic coming to a close and provide a space to reconnect after years of being apart.

Clarity decided to take Wiley’s theme, “Accelerate”, and really run with it. We created a V-shaped center screen that acted as a visual arrow, with an arrowhead-like thrust (stage). Instead of classroom seating, we created a triangular seating arrangement that allowed people to be around the stage and to both interact with the presentation and other audience members on the other side. This not only increased engagement, but it mirrored the “Accelerate” theme beautifully. 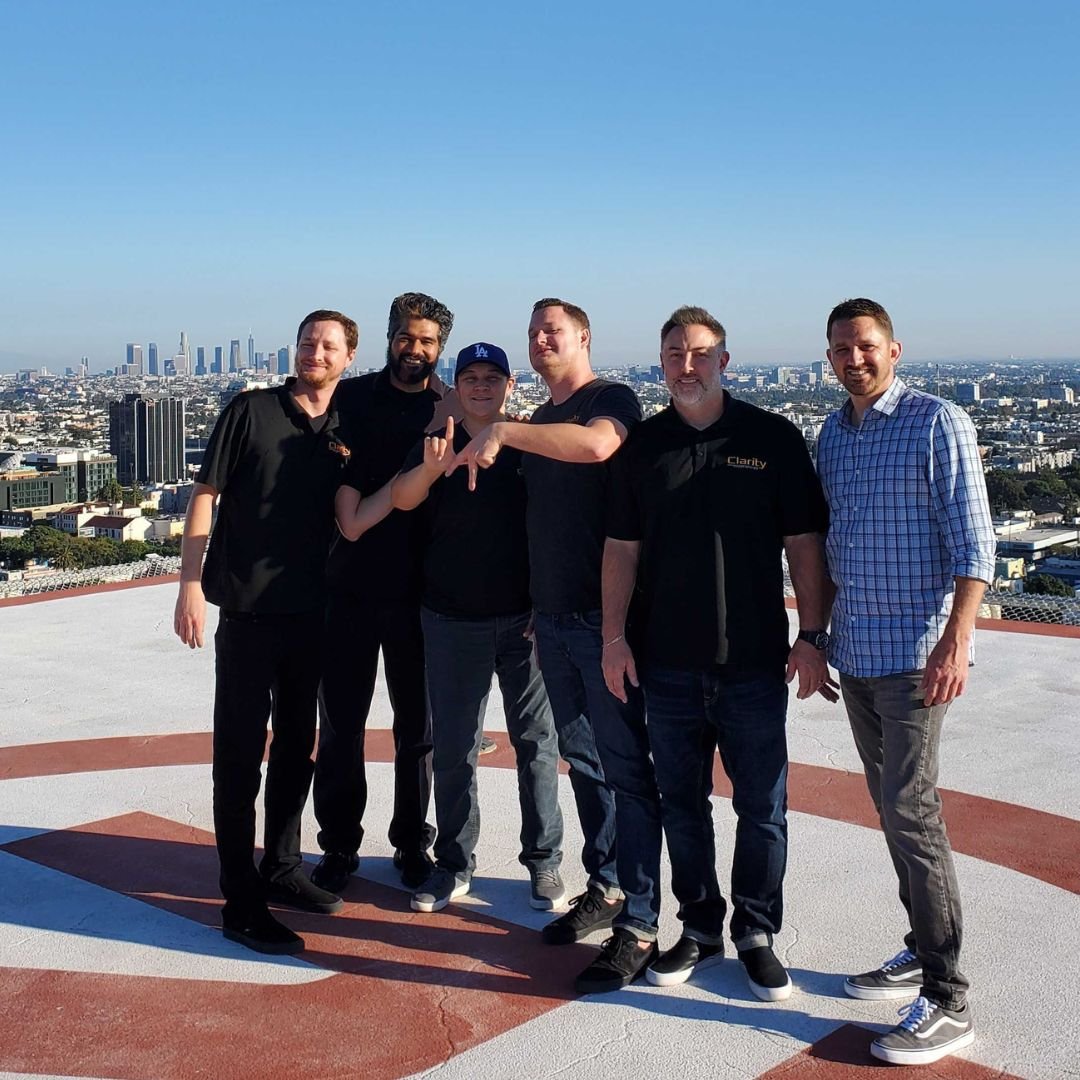 Some of the more difficult challenges for this live event were the transitions to the breakouts. Not only were we creating a dynamic and encompassing set for the general session, but we had to build it in such a way that the ballroom in which the session was taking place could be divided into three sections for breakout rooms. Once the breakout rooms were completed, they would then again need to be converted back into a general session. This becomes extremely difficult when you have LED walls, staging, truss, etc. our team helped in the design process by intentionally delivering the creative in the middle, as far as keeping the stage, LED walls, and V-shaped screens centered. During the breakout sessions, the sides of the room had separate screens attached to truss with a separate projection and sound system. In the end, it worked out great and allowed the general session to be converted into breakouts within a 10-15 minute turnaround time.

The other unique thing was the attention to different people’s opinions on the current health crisis that hasn’t fully disappeared. Wiley requested to build a small outside viewing area with monitors, which is not easy in LA due to the amount of direct sunlight. This would be for anyone needing to get some air but not wanting to miss any of the general session. The patio area would then need to have video and audio signals run out to it and allow for sales leaders to go out there during interactive parts of the session. This was all to be completed with high-quality audio and video and zero latency/feedback issues. As a team, we were able to come up with simple and easy, yet effective solutions to work through the process. The client was extremely happy with our ability to be creative and adaptable through some of their on-the-spot changes/requests.

From consultants to partners, Wiley and Clarity’s continued relationship was based solely on the creative, starting with us collaborating on virtual events. It wasn't based on how Clarity recorded the event or what the virtual experience was like because we only produced the content for them that first year, not the full production. This put Clarity in a prime position to help them produce an outstanding live event once they decided to partner with us. This was because it was the content and creativity that had built the partnership, making it easier for them to transition to live events with Clarity. We’d consider that a major success!

Our event expertise in AV focuses on ensuring the success of event planners while creating a memorable experience for attendees. We offer creative AV production services for all-size meetings, conferences, and events. With our combined experience in the industry, we get the pressures our customers face in planning and executing events. We're here to take some of that pressure away. Our purpose is to make live events a remarkable place to be. Delivering experiential events is our mission. Creating an event that 'moves'​ the attendees is our passion. Making sure the event is executed without a hitch is our expertise.

Let us know what you think